In early September, Zappos CEO Tony Hsieh was overseeing his company’s impending move from Henderson to Downtown with the help of a circle of trusted associates. By the end of the month, he was an arts producer. Hsieh, together with his marketing advisor Joey Vanas, Zappos executives Fred Mossler and Steve Hill, and developer Andrew Donner acquired the rights to the First Friday Las Vegas trademark and formed First Friday Las Vegas, LLC, the newly built engine for the nine-year-old arts event that paved the way for Downtown’s urban renaissance. The next chapter in the city’s cultural evolution was about to begin. 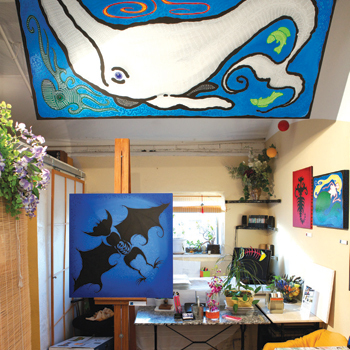 “All of us started getting involved in Downtown roughly a little less than a year ago,” Hsieh says. “We always wanted to bring more art, more live music, more of an entrepreneurial feel, more of a tech scene, and so on. Then we heard First Friday was going on hiatus for several months, and that’s when Joey and I started talking about what we could do to make sure it doesn’t just die out.”

Hsieh brought the proposition to the others, with an initial estimate of a half-million dollars to operate First Friday for the next year. “For us, it’s always been more of a passion project,” Hsieh says. “Not only did we want to keep it going, but we wanted to expand it and take it to the next level.”

“There are 29 other days in the month,” Vanas says. “So whether it’s small mixers, panel discussions, talks with visiting artists, or more gallery openings or functions within the galleries, how do we take this scene going on here and expose more people to it throughout the month, with First Friday being the big marquee event?”

Despite its popularity, First Friday was in crisis by the end of summer. Funding problems led to an announcement by Whirlygig, the nonprofit that has supervised the First Friday Casino Center street party since its October 2002 inception, that First Friday would be shut down for the slow summer months of August and September

Then Zappos entered the picture. Hsieh was already in the habit of taking business acquaintances on the town for First Friday, sending them home with changed perceptions about what Vegas is—and what it could be. Zappos was first approached about becoming an event sponsor, but the possibility of ownership quickly rose. The prospect fit with the visions Hsieh and his associates—four of whom now live in Downtown’s The Ogden high-rise—had for the future of their adopted city. Their collective experience in marketing, brand building, networking, and promotions could enable First Friday to evolve, and possibly attract art tourism as well as businesses that would otherwise be hesitant to relocate (as Zappos did) to a town reputed to be void of the kind of cultural offerings that make a city livable to many.

The First Friday Five immediately set about doing what they could for the October relaunch, expanding much-needed free parking to include the Stratosphere and City Hall facility. Both locations are now part of the shuttle loop that reaches the Clark County Government Center and Fremont East District, where Emergency Arts serves as a satellite hub. First Friday has also grown: In addition to the original area, which we all know and love, bands now occupy the blocked-off stretch of Fremont between the Strip and Sixth Street every First Friday, and the number of mobile food trucks has increased, as well. A third section, planned for spring, offers high-end art and separate performance options, live jazz among them.

More proactive efforts aimed at attracting a more sophisticated buyer audience seem assured after the hiring of Michele Quinn and Nicole Moffatt of CityCenter’s Centerpiece Gallery as curators of First Friday’s outdoor exhibit spaces. Whirlygig’s board president, Cindy Funkhouser, is encouraged that First Friday will continue to contribute to the social fabric of Las Vegas. “Their goal seems to be to have a real sense of community among the arts community, which is great because we are very small,” she says. “We need to stick together.”